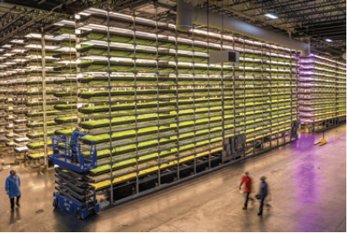 Interview with PropertyEU - Farms in the air

Across the continent, the vertical farming sector is worth an estimated €50 bn and is in its early research and development phase. Maturation is forecast as being as long as 10 years away, according to UK-based Astarte Capital Partners.

The value-add alternatives investor – which provides institutional capital access to non-traditional real assets strategies – says it is in the process of identifying target investments in the segment.
Stavros Siokos, manager partner, believes vertical farming has appeal for investors with interest in thematic real estate and environmental, social, governance (ESG) issues. ‘Any strategy based upon proximity of assets to population hubs has a good future and we are moving into a world where large spaces will not be as utilised as they were in the past,’ he says. ‘So vertical farming is a big trend with a great future.

‘I see it as being like renewable energy 20 years ago, when most investors would not consider it, then it became an “alternative” alternative and today it is pretty mainstream.’ In continental Europe, Germany and France are seeing vertical farms attract investors, presaging expansion. For example, Berlin-based Infarm raised €84 mln last year from mainly European investors such as EASME, Atomico, AstanorVentures, Cherry ventures, TriplePoint Captial and Balderton Capital. Meanwhile, Agricool in France has drawn seed capital from Henri Seydoux, Xange, Danone Manifesto Venture, KimaVentures, Daphni, Bpifrance and MarbeufCapital.

In this early stage of development for vertical farming, the segment comes with caveats. In the event it grows big enough to replace office and retail in some cities, then real estate managers and investors look likely to face some jarring financial realities. According to industry watchers PropertyEU consulted, the rent a vertical farm pays might be only 25% of what is normal for a corporate office tenant to pay. However, leases can be long, in the region of 10 years. ‘Vertical farming is like government bonds, whereas office space is like corporate bonds,’ is how one expert puts it.

Please read the full article by opening the attached PDF.