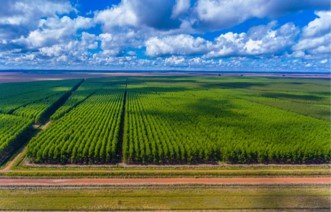 What connects a wood fibre mill in Sweden with the catwalk? Florence Chong talks to Martin Forsen of SilviPar

For a number of years now, wood fibre from Sweden’s Domsjö Fabriker mill has been woven intothe fabric of British designer Stella McCartney’s top collections. That the product has made it tohigh fashion says a lot about wood fibre’s versatility.

Martin Forsen, who formerly managed the Domsjö Fabriker mill, recalls those early interactions histeam had with McCartney. Now executive chairman of SilviPar, a Stockholm-based timbermanagement company, he says: “Stella came to us in the mid-2000s, wanting to use wood fibre inpreference to leather or cotton.”

At the time, he says, Domsjö Fabriker could have perhaps been better described as a bio-refinery.Located in Omaskoldsvik, it had an established reputation for converting raw forest materials intospecialty cellulose, lignin and bio-ethanol. The mill has since been sold to Indian conglomerateAditya Birla Group.

McCartney today creates fashion from wood-based cellulose, which is processed into viscosefilament in Germany, then converted into thread and woven into fabric in Italy. As someone whosebusiness ethos is guided by sustainability, it is hardly surprising that McCartney would seek outtimber fibre to use in her collections. It is more sustainable than, say, cotton, which requires largequantities of water, pesticide and fertiliser.

SAIFF had its first close a few months ago, reaching almost half of its target capacity of US$200m(€88.6m) from pension funds, big corporates and other impact investors. The fund is scalable, andpotentially could raise an additional $100m to reach its capacity limit of US$300m.

The capital is being put to work immediately to plant fast-growing eucalyptus in Paraguay. “Whatwe are doing is a pure forestry fund,” Forsen says. “The middle class is growing, and consumptionof timber will increase, with consumers increasingly searching for sustainable products.

“We cannot find a material other than wood that can fill this demand. We can use trees for energy[ethanol], plywood or solid wood, and the range of usage is widening. My shirts have 50% wood inthem, and I sleep in sheets made with food fibre.”

Forsen sees no wastage. “The big logs go into making solid wood products like furniture, plywoodand construction materials; the middle logs go into pulp, which is used in a range of products,including textiles. We are now seeing pulp used as a substitute for oil-based products. And thesmaller branches can be used to make biofuel.”

For the moment, SilviPar remains a plantation company, producing the raw materials. SilviParhopes to have 50,000 hectares planted within five years, and to encourage development of alarge-scale forestry cluster of industries around the plantations.

“We looked at more than 100 countries before deciding that Paraguay was the best country for thiskind of investment,” he says. “We have drilled down even further to conclude that the best site forforestry is within a 100km radius of our land. We planted our first trees in 2013, and have alreadydelivered our first shipment to a local mill.”

Forsen says a 3,400-hectare proof-of-concept project is under way to test the seedlings andmanagement technique. Trees grow to full size and are ready for harvesting in seven years –owing to the amount of rainfall, the soil and the climate of Paraguay, he says. By way ofcomparison, trees in Sweden take up to 100 years to reach maturity.

“Our plantations are technology-neutral and can be used for anything from solid wood and pulp tobio-energy,” Forsen says. “But our background is in the dissolving of cellulose and pulp for textiles.We would love to see such an industry in Paraguay.

“Anything you can make from oil, increasingly you can also make from wood. So while the mainfocus remains on producing solid wood products for construction, furniture and so on, you knowyou will make an extra impact by sequestrating the carbon inside other wood products.”

Together with Swedish furniture company Ikea, SilviPar has calculated that its project in Paraguay“would capture about 14m tonnes of carbon per annum – with the prerequisite certifications”.
Forsen says the full carbon impact of the whole plantation is 10 times higher if the substitutioneffect is included with the sequestration effect. “It is actually a misconception that you can’t cut thetrees in order to sequestrate the carbon,” he says. “We do a baseline of what is on the land beforewe start planting. We only plant on degraded grass land with low biodiversity and low carbonsequestration.

“If you plant trees and use the plantation exclusively for sequestration, you can potentially createsocial problems because no one gets income from it, Forsen says. “We are trying to bring benefitsto people by improving their livelihoods. And we are trying to connect timber back to the future.

“During World War II, the Domsjo Mill produced ethanol. At another time, 100 tonnes of ourmaterial went to space on a spaceship as heat insulation material.”

Timber in all its forms, it seems, is as surprising as it is unusual.

Direct link to the article: https://realassets.ipe.com/infrastructure/forestry-how-timber-became-a-m...