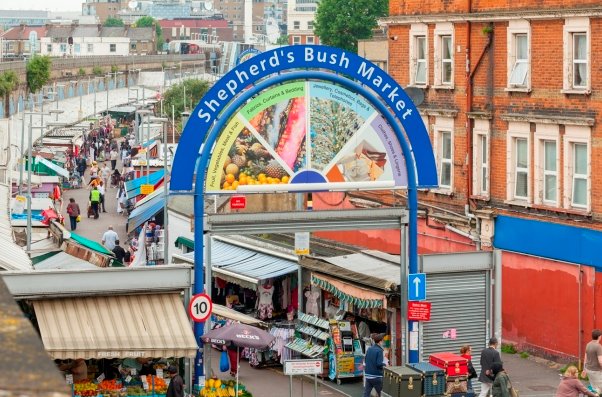 Originally established in 1914, Shepherd’s Bush Market is one of London’s most historic and well-known markets. Each year it welcomes visitors from around the world, drawn by its character, charm and reputation for textiles and high-quality goods. The market is situated in West London, between its namesake underground station and Goldhawk Road, and neighbours the White City regeneration area and Westfield London. The site involves a total of 4.2 acres, including adjoining land available for a mixed-use development with affordable housing.

Yoo Capital are experienced real estate investors who specialise in placemaking, with particular experience in conservation areas, mixed-use environments and working with local communities to create places that contribute to the local area. Our ethos is one of creativity and collaboration. Most recently, Yoo Capital have applied this approach to the redevelopment of the Olympia exhibition centre. The project will see the 130-year-old exhibition centre transformed into a world-leading arts, entertainment, exhibition and experiential district whilst staying true
to its original heritage as an exhibition centre and a ‘People’s Palace’.

Cllr Stephen Cowan, Leader of the London Borough of Hammersmith & Fulham, said:
“I welcome the fresh start. The traders and Goldhawk Road shopkeepers have suffered a miserable time for over a decade ever since this scheme first started. Meanwhile, Shepherd’s Bush Market has declined.

I know Yoo Capital and having seen how they work elsewhere in our borough welcome their investment and stewardship of this important part of Shepherd’s Bush.

I’m confident they’ll invest and work collaboratively to ensure market traders thrive and prosper, and that new genuinely affordable homes and workspaces are built on the adjacent Old Laundry Yard site. I look forward to working with them and local people to deliver those results.”

John Hitchcox, Yoo Chairman, said: “We are excited to be entering into a new era with Shepherd’s Bush Market. The last few months have taken their toll on businesses large and small and we look
forward to investing in the market and the wider area to ensure that they come back stronger than ever.”

Lloyd Lee, Managing Partner at Yoo Capital, said: “We are delighted to complete the acquisition of a majority ownership interest in Shepherd’s Bush Market. The market is a well-loved London landmark and we are excited to work with the traders, community and London Borough of Hammersmith Fulham to protect and celebrate the unique heritage and character of the market and further invest in it and the local area.”

U+I, the specialist regeneration developer and investor, will maintain a minority interest in Shepherd’s Bush Market. Commenting on the acquisition, Richard Upton, Chief Development Officer said: “Yoo Capital has significant place-making experience and is the right partner to accelerate the regeneration of Shepherd’s Bush Market, working closely with the local community and stakeholders to invest in supporting and Yoo Cenhancing this cornerstone of west London culture.”